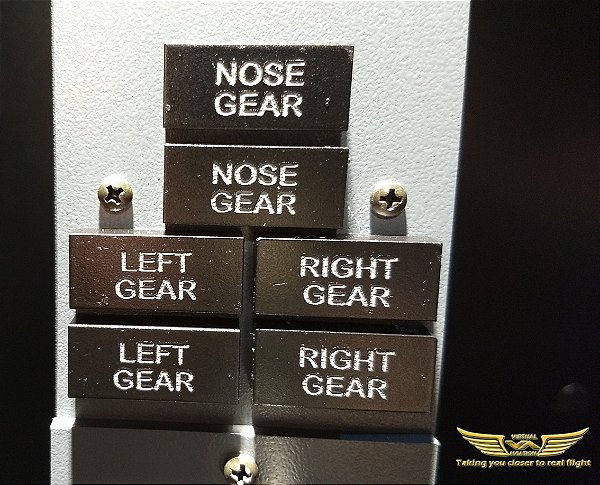 The Virtual Aviation Store presents you The Boeing 737 Landing Gear Lever fully connected with you simulator (*).
This hardware allows you will be able to low and raise the landing gear of your aircraft or any other aircraft you want to fly since it has a moving landing gear. I said any ACFT, it means, not just the Boeing 737, any Aircraft. Get much more realism and efficiency on one device that you will use whenever you fly. Avoid using a single button of your joystick to control the  landing gear, act as reality having the specific hardware for this!
As real Boeing 737 Landing Gear size and look, you've got be astonished when you have it in your cockpit. It brings full-illumination with back-panel lit with leds powered by an external 12V power supply (included) avoiding the use the power of computer's USB port.
Everything works in real time according to the state of the Landing Gear in the simulator. This is made possible by the development of an exclusive and proudly software that I've created for this hardware.

See here the Software screen:> https://www.virtualaviation.com.br/none-40211164).
The Software makes up of a mini panel that monitors the status of the Landing Gear in real time. All Landing Gear LED lights on and off in real time according the simulator. This software can be minimized while flying.

The software is responsible for the communication between the Flight Simulator (*) and the hardware (Landing Gear), connected via the USB port. The USB cable is also included.
And finally...forget about having to use your mouse or even worse! ...have to press the G key on the keyboard at every takeoff or landing... No way!  Your only job will be to position it UP or DOWN as real pilots do at cockpit. That's why the Virtual Aviation Takes you closer to real flight.

The controller board (already installed inside of Landing Gear - just plug'n'play).

A 1.5 meter USB cable to connect Landing Gear to the computer.

A 12V / 1A power supply for Landing Gear Leds,  backlight panel and controller board.

Soon we will have the XPlane Software version too (under development).

Taking you closer to real flight